Back to all news items

Recently an article written by Peter Deadman was published in the Journal of Chinese Medicine on the importance of practising qigong for acupuncturists.

In this article the relationship of yinyang and the autonomic nervous system is beautifully described. In the abstract he states that he is surprised by the relatively low numbers of acupuncturists and Chinese medicine practitioners who practise qigong since “it offers direct lived experience of yinyang, the acupuncture points and channels and more. It springs from the same roots as our medicine and enhances our ability to enjoy free flow, harmony and centred, relaxed parasympathetic states that contribute to our own health and wellbeing as well as that of our patients.”

In the article he elaborates on the functions of the autonomic nervous system in relation to yin and yang:
“The autonomic nervous system (ANS) is an almost too perfect illustration of yinyang dynamics. The yang sympathetic branch of the ANS is conventionally said to produce the ‘fight or flight’ response. It is activated in times of danger and stress, as well as voluntarily – when we choose to do or watch scary things. Blood vessels constrict, blood pressure rises and breathing and heart rate speed up. It is part of our ancient defence mechanism and can save life and limb, but we need to be able to revert back to yin, parasympathetic dominance as soon as the threat has passed. However, many people are stuck to varying degrees in sympathetic dominance. They experience chronic or acute levels of stress, fear, anxiety, worry, defensiveness.” 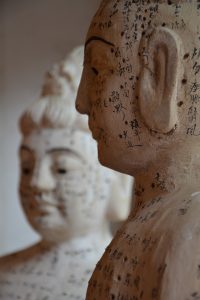 “Their cells burn more energy, giving rise to inflammation, cell damage and breakdown of cell repair – factors which we know underlie many chronic diseases. The parasympathetic nervous system, by contrast, is the rest, relax, digest and repair branch of the ANS. Blood vessels soften and dilate, heart rate and blood pressure go down, the immune system is enhanced, energy reserves are restored and anti-inflammatory pathways counter the inflammatory effects of excess sympathetic activation. Emotionally, parasympathetic dominance is characterised by feelings of safety, trust, intimacy, friendliness and ‘flow states’. When we practise qigong, with its combination of mindful movement and (especially) slow, deep, lower abdominal breathing, we are training ourselves to deeply enter this parasympathetic dominant state. This not only enhances our own physical and mental wellbeing, but it radiates out of us as an invitation to others (including our patients) to let their defences down.”

“A flexible and responsive ANS also demonstrates the wisdom of the ‘yin within yang’ and ‘yang within yin’ imagery of the taijitu (yinyang) symbol. To respond to danger and other life challenges, we need a rapid yang sympathetic response while retaining a core, still presence (yin within yang) so that we keep our wits about us rather than panic in the face of threats. And while the ability to enter a deep parasympathetic state optimises our wellbeing and that of those around us, maintaining a core, alert presence (yang within yin) reduces the likelihood of us being eaten by a tiger whilst lost in meditation.”

New insight on the ANS and survival response

From recent studies of the human nervous system and subsequent development of new body oriented angles in trauma therapy, another very important reaction of the autonomous nervous system can be added making the practice of qigong even more important for therapists and everyone who works with other people.

According to the polyvagal theory1 by Steven Porges, the parasympathetic branch of the ANS is not only soothing, yin and balanced. The theory poses that there is a special branch of this nervous system that functions as an emergency brake and is therefore responsible for the freeze response. This is a less evolved and older part of the nervous system and is vital for the instant survival response of freezing (compare it to an emergency break with your car). If this freeze energy gets stuck (if this qi is not released) there is permanent stagnation and dysregulation that you cannot let go. Your life often becomes very small and this potentially has major consequences for your health, both physically and psychologically and for your relationships. Many people have such a freeze response that got stuck to a greater or lesser extent, without knowing where it comes from or even not being aware of it until something suddenly happens and is triggered. By definition, it is impossible to understand or get to know this response in yourself because the first faculty to shut down in this state is the cognitive function.

In my experience as human being, qigong practitioner, teacher and coach/therapist, (zhineng) qigong offers just enough light activation to release that freeze in the most subtle way. This, combined with a very slow pace and a safe and holding environment, is the recipe for slightly thawing that permanent freeze. Just very slightly and without too big a wave of reactions, because that would traumatize again. Sometimes the reaction is a bit too big and then there is an acute qi reaction. If this is well taken care of by the therapist and the client gets explained what this is and trusts it, this will become less after a certain period of practice and the healthy state of the ANS can return: a gentle yin-yang swing.

For a therapist it goes without saying that it is essential to be able to regulate their own qi flows, emotions and resonance without unconsciously being triggered into their own reflexes. In order to be able to stay in that centered state, it requires a lot of personal practice and release of your own strong energy patterns as well as awareness of your own typical energy patterns and how to regulate them in the moment they are perceived in a session with a client.

This clarifies the importance of personal qigong practice and a solid practise plan for anyone who wishes to work with other people, be it as therapist, coach, teacher or any other capacity.

Sign up to our newsletter and be the first to receive tips, inspiration and much more!

This website uses cookies to improve your experience while you navigate through the website. Out of these, the cookies that are categorized as necessary are stored on your browser as they are essential for the working of basic functionalities of the website. We also use third-party cookies that help us analyze and understand how you use this website. These cookies will be stored in your browser only with your consent. You also have the option to opt-out of these cookies. But opting out of some of these cookies may affect your browsing experience.
Necessary Always Enabled
Necessary cookies are absolutely essential for the website to function properly. This category only includes cookies that ensures basic functionalities and security features of the website. These cookies do not store any personal information.
Non-necessary
Any cookies that may not be particularly necessary for the website to function and is used specifically to collect user personal data via analytics, ads, other embedded contents are termed as non-necessary cookies. It is mandatory to procure user consent prior to running these cookies on your website.
SAVE & ACCEPT